They’re sprouting up everywhere. More and more gaming companies are emerging in Switzerland and their games are just as appealing internationally. In our profile series, we present the most exciting ones. Today: Momo-pi and its new game «Captain Velvet Meteor: The Jump+ Dimensions». 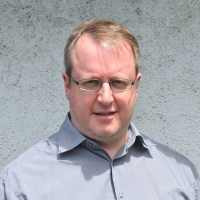 When Rinaldo Wirz is sitting at his desk in the mornings, his team members are usually still fast asleep. The reason: Rinaldo lives and works in Kyoto, a Japanese city with more than a million residents, but his colleagues are in Bulle, Lausanne and Zurich. The distance between them is almost 10,000 kilometers – and there’s also a seven-hour time difference. For Wirz and his team, however, distance and time differences have long been routine, as they’ve been working like this since 2015. In 2020, Momo-pi was officially founded as a cooperative. In July 2022, the studio released its latest work: the strategic puzzle, stealth and combat game «Captain Velvet Meteor: The Jump+ Dimensions».

But why call it «Momo-pi»? Wirz tells us how the studio got its name. «When we started out, we wanted to have the «pi» symbol in the name,» he says. «Because I believe that it could be the source code for the creation of all kinds of matter.» The Japanese word «momo» means «peach». Combined with «pi», it’s a play on words – the whole thing sounds like «momo pie», so, «peach pie». A very tasty name that piques your interest too…

Birth of a game character

Today, the core team at Momo-pi consists of three people: Creative Director Rinaldo Wirz, and the two programmers Cédric Reinhardt and Guillaume Schneuwly. For «Captain Velvet Meteor», the trio worked with Adrian Stutz (lead programming), Thomas Olsson (music/SFX), David Javet (narrative design) and Fabrice Nzinzi (character design). The idea for the «Captain Velvet Meteor» character came from Rinaldo Wirz. In 2012, he created an animated short film with that name for his final thesis at the Ceruleum School of Visual Arts in Lausanne. The two-minute film is about a boy named Damien, who is an avid Game Boy player. When his father hides the Game Boy, Damien sneaks into his office to get it back. To do so, he transforms into a superhero: «Captain Velvet Meteor»!

The story definitely has autobiographical features. «When I was younger, my mother hid our Game Boy so that we wouldn’t play too much – and I was always looking for places where she could have hidden it,» says Wirz. He was already convinced early on that the short film could be a good starting point for further animations, comics and even games. Initially, however, Wirz devoted his time to other projects: At the end of 2013, he moved to Japan to work at a number of game studios as an animator and art designer. In 2015, he contacted programmer Cédric Reinhardt, with whom he’d worked for the same Swiss company ten years previously, and asked him if he was still interested in gaming projects. Indeed, he was! Together with Guillaume Schneuwly, they created Momo-pi.

At that time, Rinaldo was already planning a new project: «Spirit» is an adventure whose light-translucent graphics are reminiscent of watercolor paintings. The motto of «Spirit» sounds just as mysterious: «We all have two lives... The second one begins when we realize we only have one.» Rinaldo, Cédric, Guillaume, narrative designer David Javet and music and sound composer Philippe Güdemann started working together on the project, which then turned out to be still (!) too big. «Spirit is still a prototype,» says Wirz. «But it has allowed us to stick together as a team all this time – with almost the same people as at the beginning.»

Death as the key to progressing

Momo-pi initially put «Spirit» on ice – and started working on «Persephone». «Persephone» is a puzzle game in which death is the key to progressing. If the player dies by turning to stone, for example, then they can use the stone corpse after they come back to life – for example, to hide behind it, or as a bridge across abysses. «We’ve derived some interesting ways to die from this twist and managed to create over 100 original levels,» says Wirz. In 2019, the game received a prize from the Japanese manga publisher Shueisha at the 2019 Google Indie Games Showcase – and was also showcased at the SwissGames booth at the gamescom computer game fair. Unfortunately, «Persephone» did not get the attention that Momo-pi had hoped for from gaming fans. If you’re curious, you can try out the demo of «Persephone» on the download platform Steam.

The contact with Shueisha proved to be valuable. Among other things, the publisher publishes the online magazine Shonen Jump+ featuring a whole series of superheroes. Wirz suggested that Shueisha put some of these characters together with Captain Velvet Meteor – «to create something original and fresh», as he puts it. The publisher agreed – and so work began on the computer game «Captain Velvet Meteor: The Jump+ Dimensions». Here, too, the main character is young Damien from the short film. When he moves to Japan with his family, his life is turned upside down. Damien is very shy – and also very lonely in his new environment. To overcome his loneliness, Damien creates the superhero Captain Velvet Meteor in his imagination – and then goes on a quest for adventures together with his favorite heroes from Jump+.

New in Japan: Damien, here with his dog Lucien

The game is now available in the Nintendo Switch store. But its development was by no means without obstacles. «The first challenge involved the production of the game – in other words, the interplay between our project, the story and the mangaka [manga drawers] at Shueisha,» says Wirz. «That was a really interesting process, but it took longer than expected.» Momo-pi reached a point where the team had to make a decision: Should it invest another six months in production to be able to complete the project? They decided to continue. It was also difficult to link the reality of the main character and his fantasies, according to the game designer – and to take into account the special franchises and characters of Jump+.

It was a personal challenge for Wirz to take responsibility for the entire project. «It was a real roller-coaster ride, keeping a balance between work and private life – and your inner balance too – for more than two years,» he says. «The stress, the joy, the hundreds of hours of overtime that I worked at night or on the weekends because I wasn’t satisfied with the details of the game yet» – that was all very strenuous for him. «The struggle with myself – and the path I personally had to take – was probably the hardest part of it,» he adds. «But it’s also the best part, because this freedom gave me the opportunity to truly realize my own vision with the project.»

As a game designer, Wirz wants to focus more on topics that are important to him personally – and that are based on his own experiences: «The hardship of growing up as a child; the cultural shock of moving to another country; living between two worlds in both of which you have roots; the death of a loved one; the difficulty a father faces raising a child – and the fear of doing it all wrong.» In his opinion, Momo-pi’s previous games all have an overarching theme. «I question what we normally see as reality,» says Wirz. «Also because I’ve had a lot of unexplained experiences in the past.» Developing computer games allows him to create his own stories that also challenge reality. «Or possibly provide answers as well.»

Every Momo-pi game is a kind of sequel to the previous one. With «Persephone», the team focused entirely on game design. «Captain Velvet Meteor» helped him to improve his storytelling skills – and much more. With new knowledge and greater self-confidence, Momo-pi is now ready to get back to its major project «Spirit». So watch this space!

Great Internet connections for gaming – our Internet subscriptions at a glance